The quest is available for a player of level 60+.
You should also have cleared the blockage leading to the Snow Plateau.
In this quest, you need to send trains with goods that you can collect in your city.
Please note that you have 3 different trains:

Each train has its own loading time, during which you need to have time to load the goods into the cars. When the timer expires, the train leaves automatically.

At the start of the event, the player has 3 carriages in each of the trains.

The maximum number of cars that can be on each of the trains is 5.

For each loaded carriage and trains sent, you receive:

Comfy deckchairs for the basic goal

“Do not disturb” signs for the daily goal

Concierge’s cap for the personal rating

Comfy deckchairs are needed for the basic goal

.
If at the time of reaching the stage you already have all the cars and/or engines, then you will receive 10 Comfy deckchairs and “Do not disturb” signs.

“Do not disturb” signs are needed for the daily goals

There are 5 stages in the Daily Goals, after completing each of which you will receive prizes - pearls (stages 1 and 3), archive cards (stages 2 and 4) or a special box in which you can get a treasure hunter's shovel, roulette token or summer key.
You have 24 hours to complete your daily goals. After that, all progress of the daily goals is reset and you collect the “Do not disturb” signs again.
Concierge’s cap is needed for the personal rating 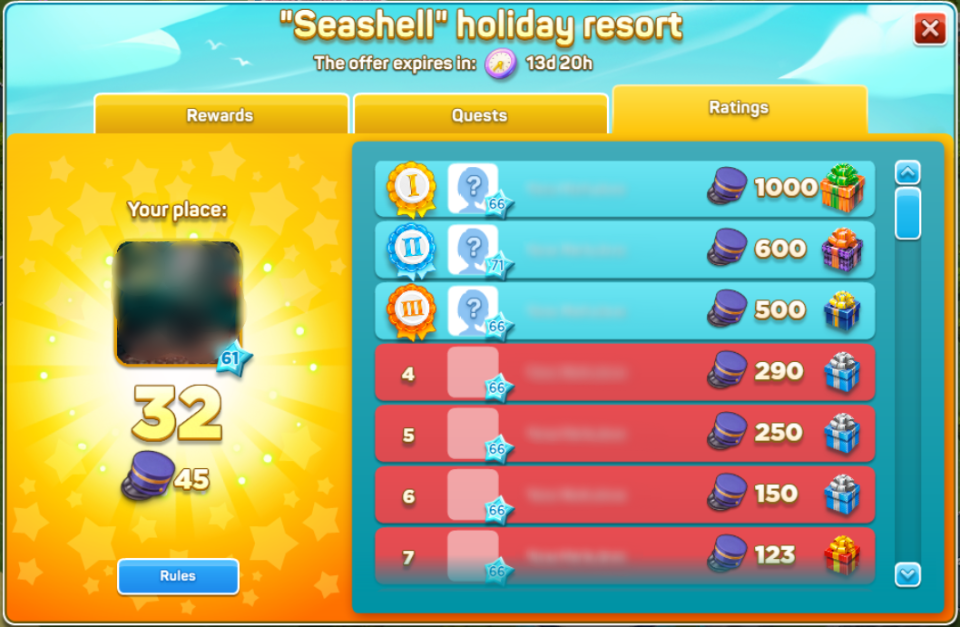 You need to collect 15 Concierge’s caps to enter the tournament.
For the first 3 places in the personal rating, players will receive cups:
Gold Seashell

After the train leaves, you need to wait until the next train arrives, but you can skip the waiting time for superbucks:

Each train can be upgraded:Enhanced Engines: Enhanced Engines will shorten the time of the train return until the end of the event.
The engine can be obtained by achieving some basic goals (3,6,9 stages)

or bought for superbucks

.
After receiving / purchasing an enhanced engine, do not forget to install it on one of the trains:

Each train needs a separate enhanced engine. The enhanced engine reduces the waiting time for a new train to arrive by an hour (3 hours instead of 4). Once installed, the engine remains on the train until the end of the quest, i.e. if you have already installed the engine on one of the trains, then it will remain on this train and the train will return 1 hour faster each time.

Freight car: With the new cars, you will be able to transport more goods in one trip.
The car can be obtained by achieving some of the main goals (1,2,4,5,7,8 stages)

or buy for superbucks

After receiving / purchasing an additional car, do not forget to install it on one of the trains: