What is seasonal currency and where do you get it?
Seasonal currency is game currency that is used during a particular season.
Seasonal currency can be purchased with real money, won in mini-games and events or dropped by certain special buildings.
➡️ If you don't spend your seasonal currency before the end of that particular season, then they will exchange automatically the day of season change at the rate of 5 of what you have to 1 of the new currency.
Example: If you have 10 pearls and they automatically exchange because you didn't use them before season change, then you will get 2 candies for fall.
At the beginning of the game, there wasn't any exchange at all and it was either use them or lose them. Now we offer 5 to 1 exchange. If you had lots of seasonal currency just at the beginning of a season, there would be not enough things at all to spend them on, such as in the shop etc. and every season you would get more and more seasonal currency, just overstocking it.

Option 1 ~ you can spend the seasonal currency on whatever you want all through the season.

Option 2 ~ You can save the seasonal currency until close to the end of the season and wait and see if we have chests or something else special to spend them on (sometimes we do, sometimes we don't )

Option 3 ~ You save them all season or save what you have left and they exchange automatically the day of season change at the 5 to 1 rate.
I have also attached a picture so that you can see the different currencies the game has.
This currency changes with every new season:
Spring (March - May): Daffodils
Summer (June - August): Pearls
Fall (September - November): Candy
Winter (December - February): Glass Baubles 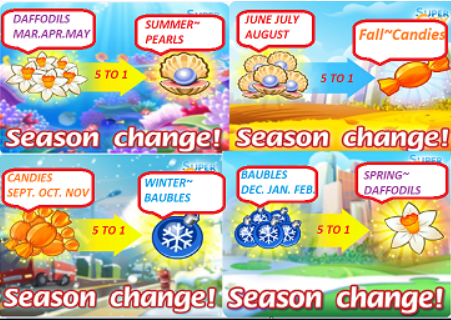 3) You can go to your game and see which buildings they are at any time during the season. Example below: 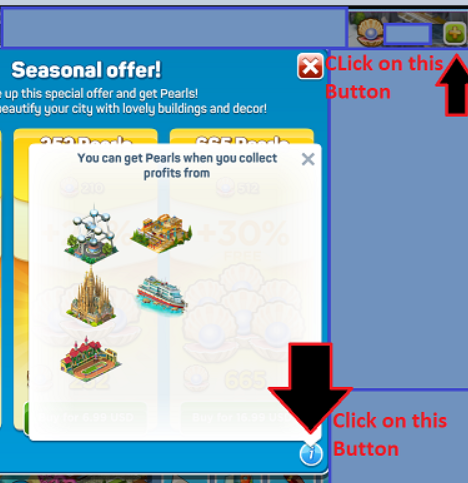 Do not worry! Every year and every season change the buildings that give the seasonal currency will change also.
There will be quests to get buildings that drop seasonal currency, and there will be buildings for purchase as well.  Don't worry if you don't have any buildings at the beginning of the season, there will be lots more added as the season goes on. Each season is 3 months long, so there is plenty of time to get buildings.
Just because they aren't used the next season or the next year doesn't mean they won't ever be used again. Maybe something that was used in a different season may give out something for the new season? You just never know. This is our way of keeping the game fresh
The buildings will still give energy and coins even though they no longer drop seasonal currency.